What's on your mind?

Haven’t seen anymore come out for awhile. Is it on hiatus? Or are they taking their time with drawing it?

Hi ! For some time now,"Wu dong qian kun" (the manga) has been on hiatus. Since it has a finished lightnovel, I wanted to know if anyone knew which chapter the 102 of the manga corresponded to in the novel. (Chapter 102 manga : a new start after the the five seeds selection)

A previous post asked for chapter 7, which has yet to be translated.   But it seems there should be at least 1 or more chapters after it.

the great ruler side story continuation, im dying to read side story of ice spirit tribe its not complete ,

Hi, i'm happy to announce that we have a new Content Moderator and a Chat Moderator Sinfulanjel. Please say hi.

Sinfulanjel will oversee the contributions done tho this wikia and provide aid to those who have questions. Of course you can still ask me questions as well.

Sinfulanjel thanks for his contributions done so far and welcome to this wikia.

Lin Dong was cool but after fighting/arguing with the flame master because of Ying Huang Huang he became disappointing to me. So I started having mixed emotion of him.

Helping me of how I could get a good impression of him again? Everyday I think about WDQK am reminded of chapter 1223 and so on even the time the Ice master appeared.

WDQK & PMG Which story is better between the 2? Mine is PMG because I sometimes repeat the story  when he becomes an officer and also a ruler of xue yue & etc. He gets his revenge towards those arrogant people.

Thanks to you all for visiting and thanks for the support. 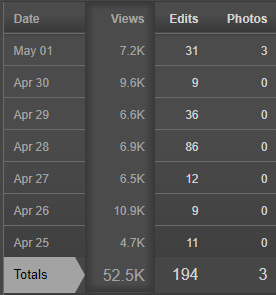 Most of you will probably already know, sadly Lin Dong's story is about to end. We have about 150 chapters left. The light novel ends on chapter 1307 and the translation on Wuxiaworld is on chapter 1158.

For those who don't already know Wu Dong Qian Kun was written by Tian Can Tu Dou. The story was finished a while ago but the translations in Wuxiaworld are still ongoing. But is now nearing its end. The story is being translated by Yellowlaw and he mentioned that he will do 21 chapters next week. Meaning 3 chapters per DAY. At this rate the novel will end in 8 weeks. I like you all to send many kudos to Yellowlaw. link to the novel of Wu Dong Qian Kun.

It has been a long road. This wikia was founded 5 July 2016‎. Nearing its two year anniversary. This wikia was the first wikia i founded. I did however had some experience editing on the Kingdom wikia.

Meaning that this wikia was my first true experience creating and maintaining a wikia. It was a road with ups and down. Mistakes were made. So i hope you can all forgive some of my mistakes or my view on this wikia.

You might not now but Wu Dong Qian Kun is actually the second novel i read. The first being Coiling Dragon. When i saw that there was no wikia for this novel i said this has to change. So i founded this wikia on 5 July 2016‎.

I want to take some time to thank all the people who contributed since launch. And all of you who actually visited this wikia. Without you all this wikia would be pointless.

Thanks for the support and for reading this long post. :p

Note: The Yimo or their puppets the Yuan Gate might have already killed my to silence me. AVENGE ME.

i was intrigued when this was introduced in the story. However i quickly found the people on it very underwhelming.

I expected them to be stronger for starters. I also expected them be more relevant to the story as they are wanted criminals by all eight super sects.

However looking at it now they looked like mischievous children. Any peak expert of the younger generation of the super sects could deal with the top 3 wanted criminals.

This could have been an interesting arc. But in the end not much was done with it.

What are your thoughts?

If you want to discuss some topics that contains info that isn't revealed yet in the translated version from Wuxiaworld feel free to ask here.

I'm QLNI. This wikia has grown a lot since its launch the 5th July 2016. I'm still quite a bit behind the translations of Wuxiaworld. Meaning there is still a lot of work to be done. However it would be nice to have some feedback/tips from you.

Thanks for your input.

I found out there will be a drama adaptation based on this story and will be called Martial Universe.

Hi, what brought you to Wu Dong Qian Kun novel or manhua? Did you read some of the other works of the author?